If you have any special requirements, we must be made aware of these at check-in.

Welcome to The Inn at Brough

This beautiful AA 5 star rated 18th Century Coaching Inn is located in the Upper Eden Valley in the historic market and assize town of Brough, in the old county of Westmorland. It is superbly located for visits to the Yorkshire Dales and the North York Moors while historic Richmondshire, the County Palatinate of Durham, Hadrian's Wall and the Lake District National Park are within easy reach for days out. The Upper Eden Valley is quiet and free of traffic. Take a look at our "Things To Do" page for details of all the historic sites, museums, and attractions within a short drive of The Inn.

The village is on the site of the Roman fort of Verteris and the Inn used to serve as a stopover for coaches between Carlisle, Penrith and York. It  has been totally refurbished and restored to its former glory with sumptuous en-suite bedrooms complimenting the mouth watering food. We can assure all our guests of the warmest of Cumbrian welcomes.

A Brief History of Brough 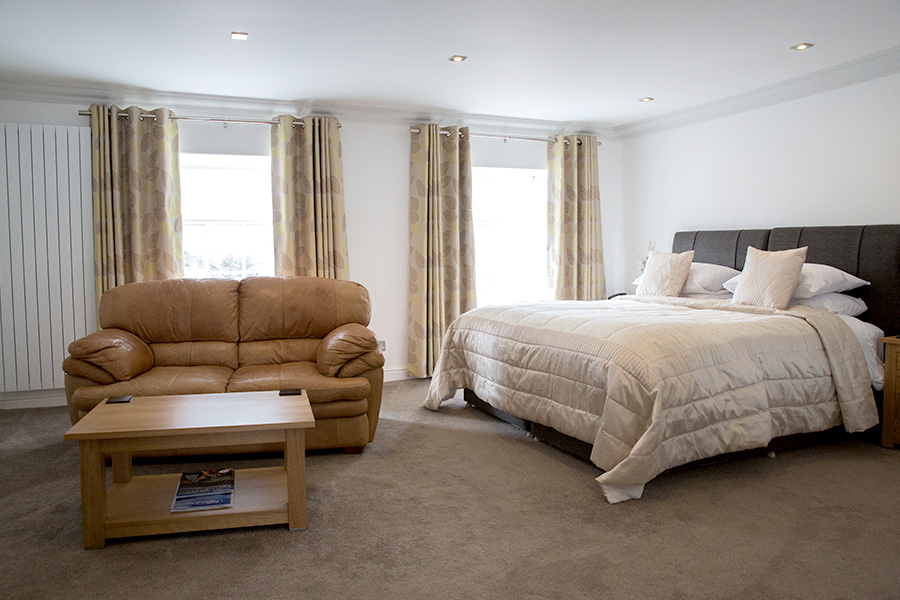 We have two superb, large Luxury Suites with amazing ensuite bathrooms. The Castle Suite has a seperate dressing area and a large sitting space; the Lady Anne Clifford Suite also has a separate sitting room. Both have beautiful views over to Brough Castle and the surrounding fells. 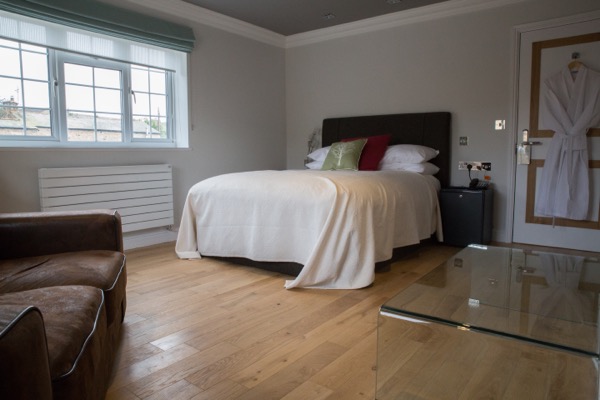 Being a listed building, facilities for the disabled traveller have been extremely difficult to provide. However we do now have a bungalow adjacent to the car park available with wheelchair access and fully compliant disabled fittings. The rooms and ensuite wet rooms are fitted out to the same high standard as the rest of the Inn. 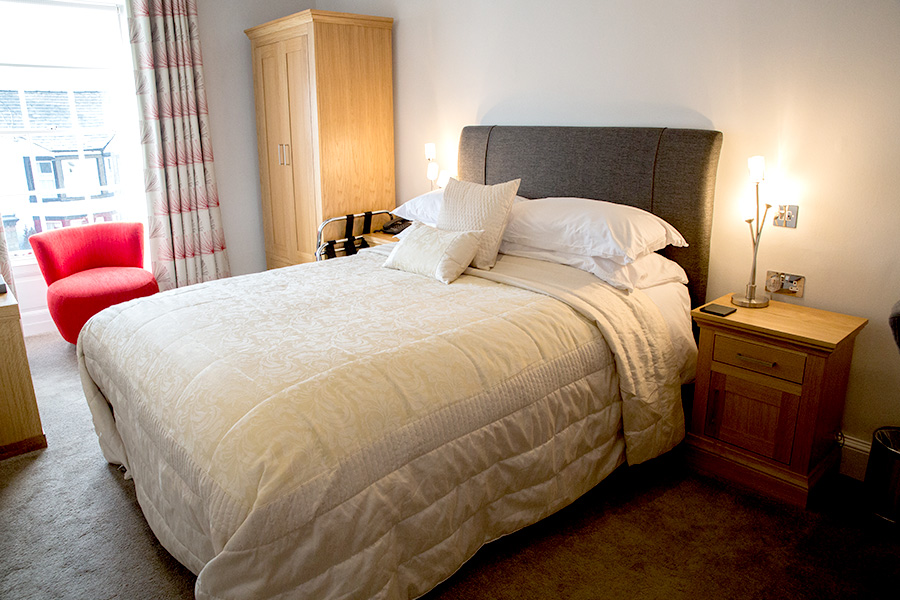 All our first floor rooms are fully equipped with work areas and furnished to the highest standards. The ensuite Villeroy and Boch bathrooms are equipped with showers or baths or both. Views are over the historic Brough Main Street or the Fells behind. 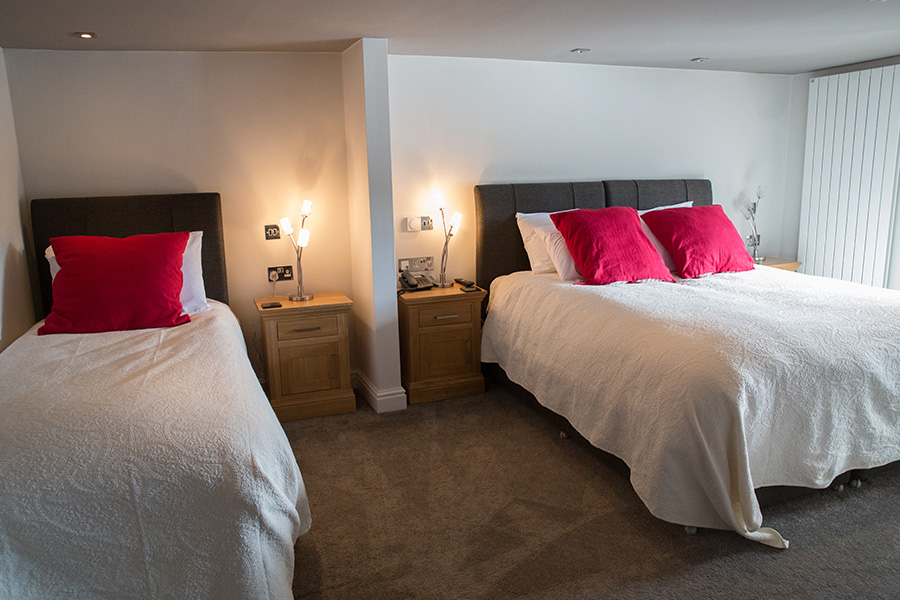 The Coachouse rooms are in part of the Inn which was used as a coach house and stables from the time when the Inn was a stopover for horse drawn coaches en-route from the North and Scotland down to the East coast and the South.

A Brief History of Brough

The Stainmore Pass was used from Roman times as the main East to West crossing of the Pennines and from the 17th to the 19th centuries was the posting road from Glasgow, Carlisle and Penrith to York and Durham. The first road along this pass was built by the Romans as a military road joining York (Eboracum) to Carlisle (Luguvalium) via Brough (Veteris or Verterae) where a fort was built to guard the Stainmore section of the road. It passed through the town along what is now Main Street.

Brough was granted a charter for a weekly market in 1330 along with four cattle markets each year and an annual four day fair which remains as Brough Hill Romany Fair held at the end of September; it moved from the village to its present site in 1661 when plague struck the north of England.

Opposite the market cross (now replaced by the clock tower) which stands on the site of another old well, there was a holy well dedicated to St Winifred (Gwenfrewi) which was a place of pilgrimage until some time before 1777. The oldest parts of St Michael's Church date from the Norman period with additional building carried out in the 14th century to add the north aisle, and in the early 16th century when most of the existing structure was built.

In the 18th and 19th centuries Brough achieved its greatest importance and prosperity as a market town known as Brough under Stainmore and consisting of the parishes of Market Brough to the north and Church Brough to the south. At this time it became a major stopping place for the new passenger and mail coaches which covered the length and breadth of the country; Brough and Stainmore between them supported 17 Inns of which what is now the Inn at Brough, built in Georgian style in the mid 1700's, was the most prestigious. The two main coaching routes over the Stainmore Pass being from Glasgow via Carlisle, Penrith and Brough, down the Eden valley to York and London; and the from Newcastle via Durham and Brough to Lancaster. Brough was the most important town in the Eden Valley, easily rivalling Appleby-in-Westmorland. The evidence of this can be seen today in the signposting of the town from as far away as Croft, Kendal and Penrith.

Brough Castle, one of the many fortificiations built along the old Roman road in the medieval period, dates back before the Conquest and was frequently besieged by Scots raiders, it was sacked in 1175 by William the Lion of Scotland. The Keep itself dates from about 1200 and belonged for a time to the Veteriponts before passing to its last keepers, the Clifford family, whose home it was. It burnt down after a Christmas party in 1521! Lady Anne Clifford inherited the Clifford estates on the death of her father in 1604 after a long legal battle. The estate had been left to her uncle in breach of an entail dating back to the the time of Edward II.

She spent all her life defying her relatives, her husband, and even the king, in her fight for her inheritance. Against all the odds she won a resounding victory in 1643. As a result she inherited not only Brough Castle and its lands but estates comprising Brougham, Skipton, Pendragon and Appleby. The castle was restored by Lady Anne in the 17th century when many "modern" additions were made. After another fire in 1666 (a bad year for fires!) it was abandoned and by 1800 it had fallen into disrepair. Lady Anne died in 1676 at Brougham Castle in the same room in which her father had been born. It was given to the state in 1921.

In 1870-72, John Marius Wilson's Imperial Gazetteer of England and Wales described Brough as: "a small old town, a township, and a parish in East Ward district, Westmoreland. The town stands on Watling-street and on the rivulet Hilbeck, in the valley of the Eden, 2 miles NNW of Barras r. station, and 5 NNE of Kirkby-Stephen. It occupies the site of the Roman station Veteræ; was very early a place of importance; and now consists chiefly of one long street. It has a post office under Penrith, an inn, remains of an ancient castle, a parish church, three other places of worship, and a free school on the foundation of an hospital founded in 1506".

(His geography was obviously not the best as Watling Street ran along what is now the A2 and the A5 from Dover to Holyhead!)

The railway age saw Brough decline in importance. In 1856 the Stockton and Darlington Railway Company wanted to build a line from Barnard Castle through Brough to Penrith. There was much local opposition to the scheme and instead it went through Kirkby Stephen with the result that the latter grew in size and importance whilst Brough shrank. The remains of the railway, axed by Beeching in the 1960's, can be seen on the right of the A685 as it climbs out of Kirkby Stephen towards Ash Fell and the M6 at Tebay. The old station yard is still in evidence as a small museum and industrial estate. Newbiggin station can still be seen on the right of the road between Ravenstonedale and Newbiggin. Kirkby Stephen is still served by the Carlisle to Settle Railway from a station 2 miles to the west of the town.

Brough became separated from Church Brough in 1977 when the A66 bypass was built and today Brough is ideally located to serve as a centre for tourism with the Lakes and the Yorkshire Dales within easy reach and with the picturesque historic towns of Barnard Castle, Richmond, Middleton in Teesdale, Penrith, Kendal and Carlisle within easy distance for a days outing.

2017 RECOGNITION OF EXCELLENCE
The Inn at Brough
HotelsCombined
9.4 Rated by Guests
The_Inn_at_Brough